This 1967 Austin Mini Cooper S is a left-hand drive example that was delivered to San Francisco in August 1967 and acquired approximately 28 years ago by the current owner, reportedly from its original owner in California. A subsequent refurbishment reportedly included a repaint in red with a white roof, a reupholstered red and gray interior, and rebuilds of the engine and gearbox. The car is powered by a numbers-matching 1,275cc inline-four paired with a four-speed manual transmission and features a Smiths tachometer, pop-out rear windows, and Minilite wheels. Work performed within the last 200 miles is said to have included a tune-up, a brake service, and refreshes of the cooling system and Hydrolastic suspension. This Cooper S is being offered on consignment by the selling dealer with records from current ownership, photos taken prior to the refurbishment, a British Motor Industry Heritage Trust certificate, and a clean California title. 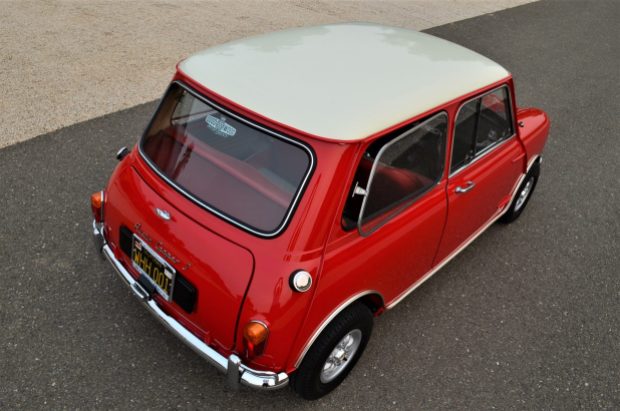 Originally finished in Almond Green, the car received a two-stage repaint in red with a white roof around 1995, and features include Lucas headlights, pop-out rear windows, and chrome trim, bumpers, and a bullet-style mirror on the driver’s door. Black California license plates are mounted at either end. 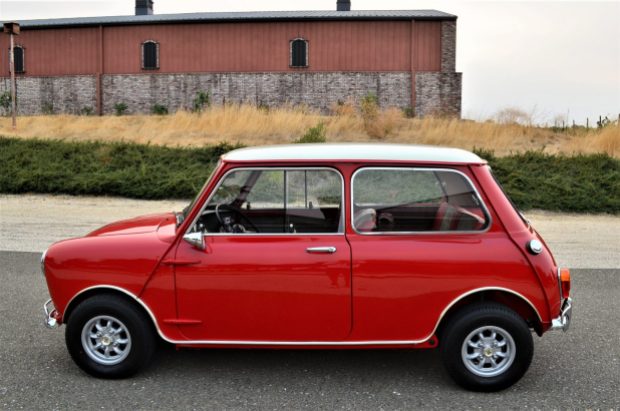 The 10×4.5” silver-painted Minilite wheels are wrapped in Yokohama A-008 tires that show 2015 date codes and measure 165/70. The car rides on Hydrolastic suspension that is said to have been recently refreshed, and the brake system features front discs and rear drums with replacement lines. A set of Cooper S steel wheels will accompany the vehicle. 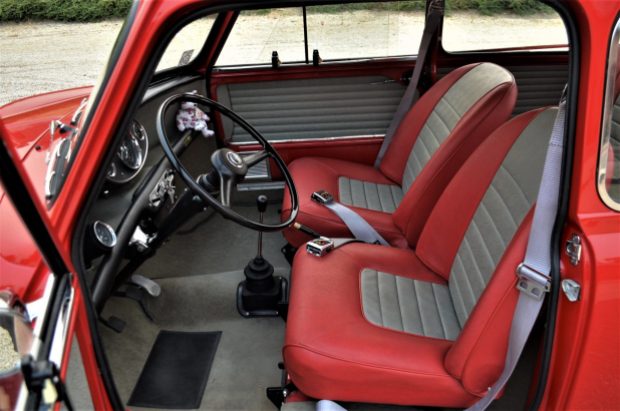 The left-hand drive cabin features reclining seats that are upholstered in red vinyl with gray cloth inserts along with matching door panels and gray carpets. Britax shoulder belts have been added for both front occupants, and additional equipment includes a heater, a fire extinguisher, and a Paddy Hopkirk gas pedal. 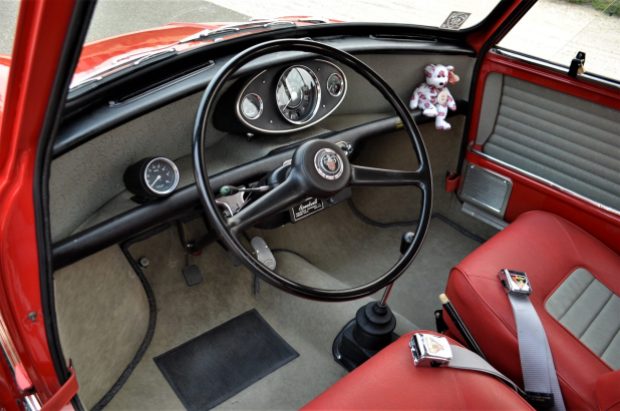 A black two-spoke steering wheel fronts an 8k-rpm Smiths tachometer and a central instrument panel that houses a Smiths 120-mph speedometer and gauges for coolant temperature, fuel level, and oil pressure. The five-digit odometer shows just over 7k miles, approximately 200 of which have been added by the owner. Total mileage is unknown. 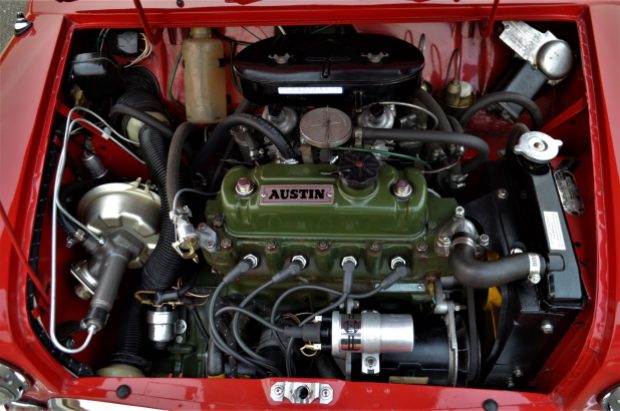 The 1,275cc inline-four is said to have been balanced, blueprinted, and rebuilt by Jon Becker of Mini-Part during the refurbishment. More recent work is said to have included a tune-up and freshening of the cooling system. 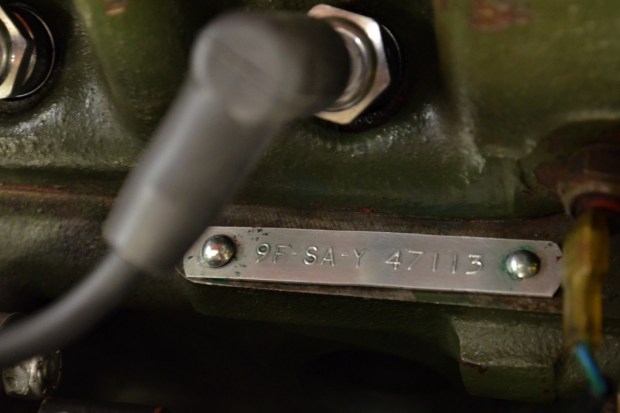 Engine tag 9F-SA-Y/47113 matches the number listed on the BMIHT certificate shown below. 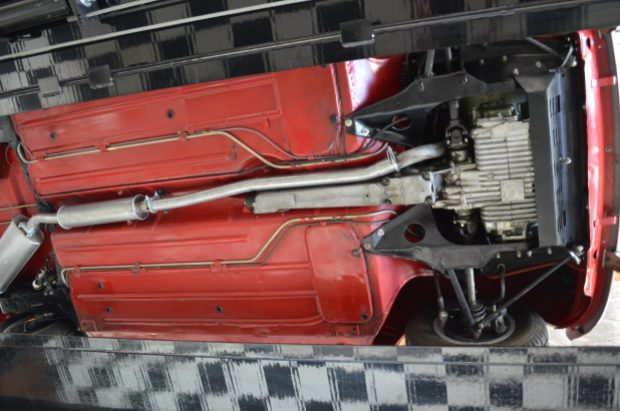 Power is sent to the front wheels through a four-speed manual gearbox, which is said to have been rebuilt during the refurbishment in the 1990s with a replacement clutch, throw-out bearing, and syncros, Additional images of the underbody, suspension components, and brakes are available in the gallery below. 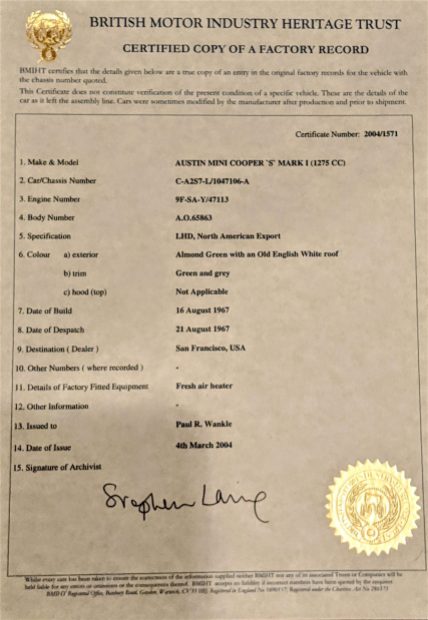 The British Motor Industry Heritage certificate lists a build date of August 16, 1967 and shows the factory colors along with the chassis, engine, and body numbers. 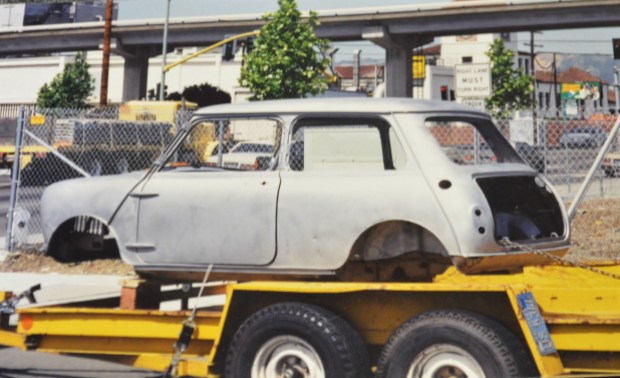 A photo of the car during the refurbishment is viewable above, and several images showing the car prior to the work can be seen in the gallery.

A driving video is shown above, and a walk-around tour is presented below.

A video of the turn signal in operation is below.